Did you knew that Nintendo used to license their classic games to be played in personal computers in Japan? That’s right! The strict “never-licensing anything” Nintendo of Japan used to allow the release of their NES and Arcade titles in Japanese computers of the 80’s, and one of these instances was a certain Donkey Kong game released on the Sharp X1 Computer in late 1984 called “Donkey Kong 3: Dai Gyakushuu“, also know as “Donkey Kong 3: The Great Counterattack“.

Hudson Soft was granted the right to port Nintendo’s classics to these computers, and while many other Nintendo games released for computers had been dumped in the past and preserved forever on the digital world, this obscure title has not enjoyed the same fate… until now!

As older floppy disks are not only aging quickly but are also becoming harder and harder to find these days, it was believed that this game was lost forever and would not be able to be preserved like many others before it.

Enter a group of Donkey Kong fans that after learning about the existence of the game, were able to spot a diskette of the X1 version on Yahoo Auctions Japan. Shortly after it was bought for 44,500 Yen (About US$415). Before we go into the details of the game dumping efforts, a bit of history on this rare title.

The floppy disk auction at Yahoo Auctions in Japan 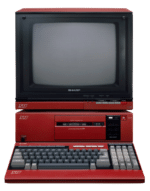 Donkey Kong 3: Dai Gyakushuu (ドンキーコング３ 大逆襲 ) or DKDG, for short, was released in October ’84 for the NEC PC-8801, PC-6601, and Sharp X1 computers by Hudson Soft. Not unlike other Nintendo spin-offs developed by Hudson in the mid 80s, DKDG was created as sort of a sequel to the Donkey Kong 3 arcade game.

There are 20 unique stages, which loop around upon completion until game over. The game has no well-defined storyline. Apparently, according to the manual, Hudson was interested in hearing the players’ interpretations about the progression of the stages, and wanted them to send in their own stories. In other words, the story is totally subjective!

The game’s mechanics are somewhat simpler than the original DK3 arcade game; Stanley no longer has the ability to jump and is free from the responsibility of defending his plants. This game is all about fighting off DK. The point is to clear the waves of incoming enemies, like any typical shoot ’em up. You still have to make sure the parachuting DK doesn’t make it to the ground, or else! 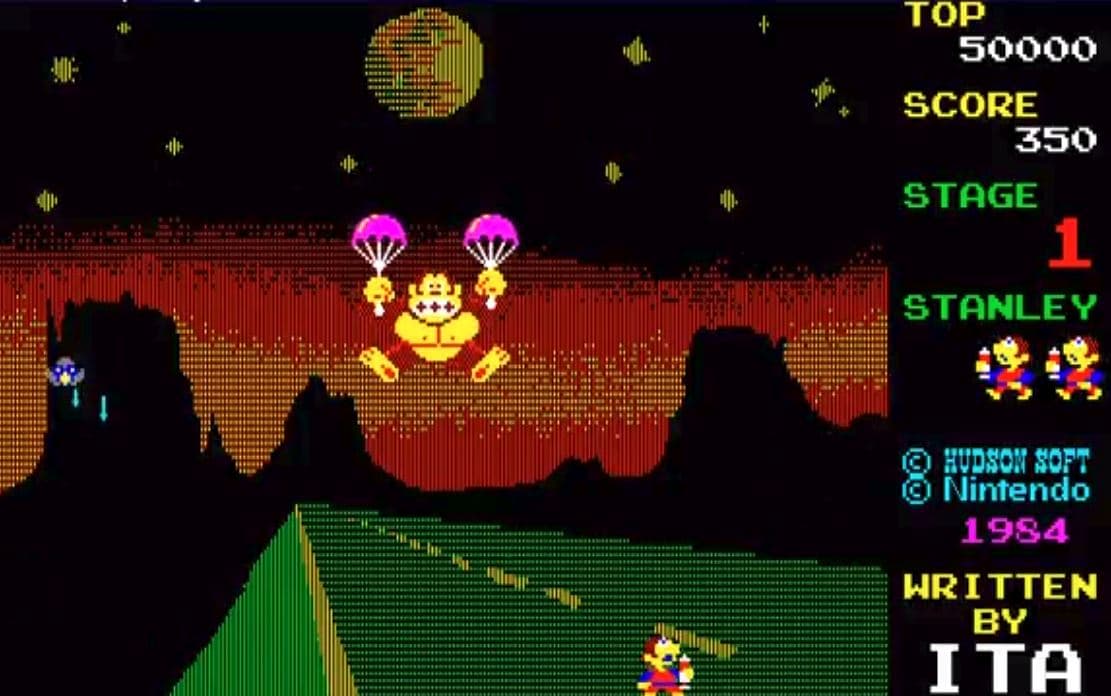 Similarly to the the other Hudson-Nintendo games, the X1 version of DKDG runs really smoothly and does so with a coherent palette, likely making it the definitive version. Prior to this endeavor, the game has been unavailable to the public on all platforms it was released for, and there has been no footage online of any levels for the Sharp X1 version past level 7.

A possible reason for the game’s rarity may be that it was poorly advertised. It was first mentioned in the April ’84 issue of Micom Basic Magazine and a few other magazines, but the ad didn’t include any screenshots, and the logo strongly resembled the arcade game’s logo, causing readers to overlook the ad. Add to that the fact that Donkey Kong 3 is probably the less appealing of the three Donkey Kong arcade games released up to 1984. Not too many people bought it, therefore it became rare.

When you combine it to the medium in which the game was released: 3″ diskettes; and the Sharp X1 not being the most popular computer system of the time, it clearly explains why this game was not only rare and hard to find, but it was also almost forgotten!

Bringing the Game Back to Life

After acquiring the game on Yahoo Auctions, now it was time to figure out how to dump it! X1 used a very rare 3″ 320KB floppy disk format by Maxwell that even though they were similar to the 5.25″ disks that the X1 also used, they were substantially different than the 3.5″ 1.44MB disks that ended up being widely used until recently. This 3″ format is not well documented and the equipment necessary to read them is much harder to find.

The 3″ format became quickly obsolete back then because the floppy disks casing was really expensive to produce which pushed major computer companies to adopt the 3.5″ format, leaving the 3″ standard at large. So, not only the hardware is hard to find, but the formatting of these disks is completely different from the standards that we know today. Soon the team figured out that some serious reverse-engineering would be required to bring the contents of this disk to the masses.

The team was able to find a stand alone 3″ floppy drive shortly after purchasing the disk from Yahoo Auctions. The drive seemed to be in working order, however, older drives like that used DIP switches that needed to be set in order for the drive to work. After finding a specific page with DIP switches settings specific to this type of drive on “Neo Kobe”, they were able to figure out how to plug the drive on a Sharp X1 Turbo Z II and run the game from there.

As predicted – and hoped – the game booted and ran fine with this setup, but even though it ran, dumping the image was a whole other story, and after many trials and errors and a lot of documentation reading, they were able to oddly enough dump the game by connecting the 3″drive to a Win98 machine and set it up using the tips of an enthusiast in ancient floppy disk technology. After all that effort, the game was able to be easily dumped in the D88 format, used by the Sharp X1.

The details on how this was achieved are really interesting, and we recommend the read! You can read the entire story in detail and download the image of the game at the official project page.

Soon after the game image dropped on the internet, YouTubers started to record gameplay of this rare title. You can see one of the most interesting ones we’ve found below.

It’s an awesome experience to see an incredibly obscure Japanese classic game being dumped, preserved and released for everyone to enjoy! It really makes us feel like it’s mid to late 90’s when emulation was taking off and games of all kinds from all systems were being dumped daily and preserved for the World’s enjoyment.

This game plays great on the X1 and it’s as fun as a Donkey Kong 3 game can be, however, the work isn’t over for true Donkey Kong completionists. This X1 version of Donkey Kong 3: Dai Gyakushuu is one of three versions of the game that were made back then, and the NEC PC-8801 and NEC PC-6601 versions are still to be found and dumped.

It seems that they do show up on Yahoo Auctions Japan every now and then, but at a premium, so we can only hope that this or another group of enthusiasts get their hands in them and dump them to be shared with the world, instead of keeping these gems locked up and rotting away in some dusty game collection.